“Just like men, perfume is never perfect right away; you have to let it seduce you,” - Jean Patou

Just as a musician has scales, a perfumer has fragrance notes and classifies them similarly: top notes, heart notes, and base notes. It’s this blend of fragrance notes, like a combination of musical notes, that creates an accord or a melody. Meaning the blend is complex and more sophisticated than the individual notes.
In music, a good balance of notes is required to create something pleasing to the ear. Likewise, perfumes should please the nose. Most commercially successful fragrances contain all three notes: top, heart and base. But it’s this balance you must get right when making perfumes.

Too many base notes, and the scent could be overwhelming and persistent, like a bad date that won’t leave. Too many top notes, and the fragrance will be too fickle and fleeting, like a one-night stand. You need to build a long-lasting marriage with the ingredients, and let the scent seduce you.


An Evolving Scent
When we smell a perfume, we are smelling a combination of notes. So, as the scent develops on the skin, we perceive it differently. Initially, we remark on the top notes, but after only a few minutes, that same perfume will have a more unique character and the overall aroma will have deepened.

I’m sure you’ve experienced a time when you’ve tried a perfume on your wrists and exclaimed your immediate love for it, only for it to become obnoxious and irritating later on. Or maybe you’ve smelt a new perfume and had no interest in it, yet hours later it has seduced you and you can’t get enough.

TRY IT
Grab your favorite perfume, set a timer, and see for yourself.
Spray it on a scent strip and write your first impressions. Then smell the same strip after five minutes, again after twenty minutes, and finally after one hour.

Does your impression change as the top and heart notes fade and you experience the “dry-down”?
Now, spray the perfume on your wrist and note the changes as your skin warms the scent, and your body chemistry develops an aroma that’s unique to you. Which is why it’s best to try new perfumes on your skin and not rely on the scent strip alone.

TOP NOTES
Flirty and fleeting. Top notes don’t stay the course in a perfume. A little like lightning in a thunderstorm, they’re here one moment and gone the next. What’s the point then? You might ask. But flirty and fleeting is the whole point. Just as lightning adds illumination and excitement to an otherwise dark and dooming sky, top notes add a fizzy element that entices you like the pop of a champagne cork. But like aperitifs, they won’t satisfy you for long. They’re a sample of the scent, a prelude to what’s coming next, and like a one-night stand, you’ll find out quickly if you want it to stick around.

A range of good top notes helps give a perfume a good first impression, but don’t judge too quickly. Because the molecules of the top notes are lighter than the heart and base notes, they are more volatile, and the first to disappear.

It’s a common misconception to think that when you first smell a perfume, you’re smelling the top notes first, followed by the heart, and then the base notes. That’s not entirely true.

To understand what happens, take the world of cinema as an example. The first impression of a perfume is like watching a movie trailer.
You immediately know the genre, the style, and who has the starring roles. You get the gist of what the film is about in a matter of seconds. This is when you decide if you want to watch the entire movie. It’s the same when you first experience a new perfume. Initially, you’re introduced to a glimpse of what’s in store. But give a perfume time, the lighter notes gradually dissipate, allowing the heavier notes to surface and tell their story.

Ultimately, the scent will develop into something unexpected. Perhaps it’s not as enticing as the prelude led you to believe, or it exceeded your expectations and left you feeling satisfied and wanting more. So, before passing judgement on an unfamiliar perfume, give it time, let it entice you. Experience the magic of what unfolds. Only then can you make an informed decision about whether it’s right for you.
TYPICAL TOP NOTE-BERGAMOT
The best Bergamot comes from Calabria in Southern Italy which generates 90% of the world’s production. It’s essential for Colognes and is the most widely used fragrance in perfumery. The oil is notoriously phototoxic due to a component call bergaptene. The maximum safe use is 0.5%, meaning if you have a 100ml body oil, you can only use up to 0.5ml of bergamot.

A student of mine once added several drops of it into her sunscreen, and as she lay on a Mediterranean beach, her body started to blister and burn! Because of this issue, most bergamot oil in perfumery is synthetic. The Aromatherapy industry uses the natural with extreme caution. Thankfully, a bergaptene free version is available, but due to the cost you’ll rarely find it in perfumes.
HEART NOTES
Here, you’ll discover the genuine character and soul of a fragrance. A perfume without heart notes is like a pie without filling. You’ll be left feeling vacuous and wondering where the rest of it went. Heart notes are akin to being the centre of attention at a party, but like Cinderella have to leave at midnight.

Heart notes are more noticeable once the top notes have evaporated. Because their molecules are heavier, they last longer and play a vital supporting role to the base notes as they develop.

Heart notes bridge the gap between the top and base notes, and can even serve as modifiers, giving your fragrance an interesting twist and helping to make your scent special. Think of them as a sandwich filling. Without them there’s not much point, unless you just want toast.

However, being ‘sandwiched’ between the top and base notes, heart notes are occasionally difficult to detect. Even familiar scents such as lavender take on an entirely different accord and are tricky to distinguish. Why?

Because they bounce off the top and base notes, which sometimes prevents them from having their own individual character.

Most florals are heart notes, but some will be lighter than others. For instance, rose essential oil is incredibly soft and light, yet tuberose, a relation of the narcissus, is so powerful it can knock your socks off if you use too much! Jasmine absolute is the same, so use these oils sparingly and mindfully.
TYPICAL HEART NOTE-LAVENDER
60,000 kg of lavender oil is produced annually in Provence alone. But there is more lavender oil in the world than is ever produced each year, which gives some indication to the counterfeit or ‘fragrance’ oils on the shelves. So, choose your lavender wisely. Buy it from a reputable source, look for the term ‘pure essential oil’ and ensure the Latin name ‘Lavandula Angustifolia’ is displayed on the label.

There are three types of lavender, the common terms are fine or true lavender, this variety has the least amount of flowers on the stalk, therefore the oil yield is lower, which pushes up the cost. Its relaxing properties make it highly popular and is one of the few oils that can be used undiluted on the skin.

Then there’s spike lavender, really only used for sports massage and as a decongestant because it’s highly camphorous and should never be used on children or expectant mothers.

Finally, we have Lavandin, a hybrid of the first two and a result of cross-pollination. If you’re strapped for cash, it’s a good alternative to the fine lavender. It’s also popular in colognes because it’s so much cheaper.

BASE NOTES
Base notes are like a faithful long-term relationship or marriage, they stay the course , leave a lasting impression, and comfort you throughout your life.

Base notes are heavier molecules with real staying power, such as vanilla, sandalwood, and patchouli. In any blend, these are the scents that linger the longest.

We often associate them with the past. Using base notes that remind you of positive experiences will leave more than just a lasting impression on your skin. It’s now become more personal, and that's where the psychology of scent comes in. What could be better than having a signature scent with a feel-good factor?

Be aware that if you only have one base note when creating a fragrance, it will leave you with that one lonely note, long after the top and heart notes have dispersed. Therefore, it’s crucial to have a refined blend of base notes in your fragrance if you want the scent to remain intriguing.

For example, if vanilla is your only base note, initially the fragrance will have a warm sweetness that blends in harmony with the other notes, but over time you’ll smell like a freshly baked madeleine! The addition of just one other base note, such as patchouli, prevents this from happening and produces a more complex and sophisticated scent.
TYPICAL BASE NOTE-SANDALWOOD
The East Indian sandalwood trees became endangered because of deforestation from the mismanagement of plantations. In some regions, it’s illegal to export the oil from India and most of the trees belong to the government, even if one grows in your garden. Some sellers, however, get around shipping the oil by calling it something other than sandalwood.

The trees are now being successfully grown in Australia, and 1kg will set you back at least $2500.

Only the finest, more expensive perfumes will contain the real deal because of the high cost. Amyris-West Indian Sandalwood is a cheaper alternative used in fragrance formulations. On a side note, most perfumers dislike the Australian sandalwood, believing the original can never be replaced.

Sandalore, is a popular synthetic alternative if you’re not overly fussed about natural perfumes, and it costs 22 times less than the natural. It was developed and trademarked by Givaudan, one the big five perfume houses.
But think about this before you use it. According to Perfumer’s Apprentice, “This product cannot ship by USPS due to its status as a potential marine pollutant.” 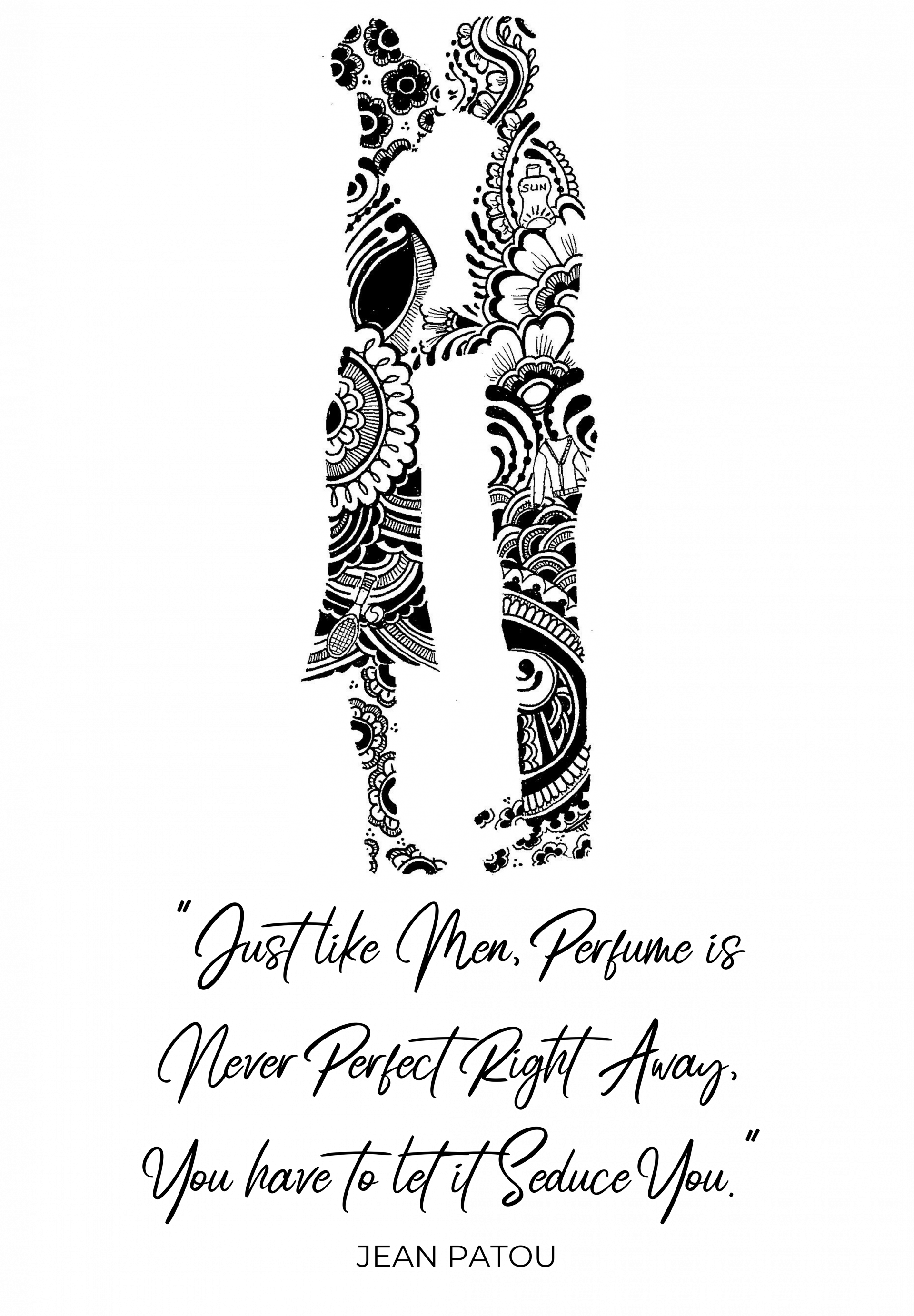